Seeking Custody Of A Non-Biological Child 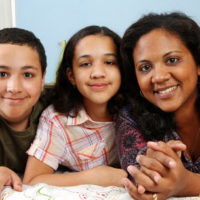 Parents in blended families often develop relationships with their non-biological children that are strong and long-lasting. The parents take on parental responsibility without concern for the fact that they are not biologically related to the children, and the parent does not legally adopt the child. Unfortunately, if the parents in a blended family end up splitting up, it may be difficult for the parents to seek custody or visitation of children who are neither biologically related to them or who the parents have not adopted.

As an example, let us say Jenny gets divorced from her husband and has primary custody of her two children. Simon also gets divorced and gets primary custody of his three children. A while after their divorces, Simon and Jenny get married and they form a new family with the five children. Both Simon and Jenny become very involved in raising all the children. Both Jenny and Simon’s former spouses are still active in their children’s lives and have not given up their parental rights.

If Simon and Jenny get divorced, their will each retain custody of their children, and may have limited access to each other’s children. Under Pennsylvania law, Simon and Jenny could likely petition for custody or visitation of each other’s children. Pennsylvania grants a person who was in loco parentis to a child standing to petition for custody or visitation. A person is deemed to be in loco parentis if he meets two conditions: one, he assumes parental status, and two, discharges parental duties. However, a person cannot obtain in loco parentis status to a child without the consent and knowledge of the child’s parent.

Standing is only one part of the issue however, and only addresses the right that a person may have to ask the court for custody. Just because a person has standing to file a petition does not mean that the court has to grant the person custody. The court still has to make the determination of whether or not granting custody or visitation to that person is in the best interest of the child.

The parent and the third party seeking custody can also come to an agreement about custody and visitation without involving the court. For instance, Simon could agree to allow his children to spend time with Jenny and Jenny could do the same for her children. In some cases, this may be in the best interest of the children if they have bonded with the person who is not legally considered a parent.

If you want to seek custody of or visitation with a child who is not your biological or adopted child, but whom you have helped raise and support through the years, you need to contact an experienced child custody attorney. Contact us at Barbara Flum Stein & Associates, serving Delaware County, Pennsylvania in all family law matters to schedule a consultation.