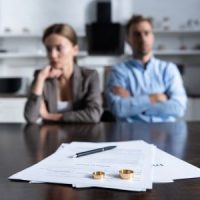 For those of you who may have missed it, the coronavirus was supposed to destroy American marriages as familiarity and over-interaction gave way to contempt. For the record, the number of divorces filed during the pandemic decreased by a large margin. However, divorce attorneys fielded more phone calls than they would on average. The fact that the courts were closed for much of the quarantine created issues for those who wanted to pursue divorce. Now that the courts are opened up again and the quarantine is over, we’re seeing more people pull the trigger on their divorce.

However, it’s important to note that statisticians, basing their assumptions on numbers coming from the Chinese government, assumed America would have comparable numbers. We never did. While the pandemic may have ended some marriages, others believe that the time together actually brought their families closer.

There are two old cliches that make a lot of sense here. The first is “absence makes the heart grow fonder” and the other, perhaps more cynically states that “familiarity breeds contempt”. Is any of that really true? One of the major issues for couples facing the pandemic was how they were going to manage all the time together. Many were working from home, children were being taught from home, and almost every family faced some form of economic pressure at the same time. While these conditions seem ripe for marital feuds, what actually happened wasn’t the universal failure of all marriages, but marriages that were on shaky grounds already tended to fare much more poorly under pandemic conditions.

So, essentially, we’ve entered phase four of the pandemic-divorce situation. The first stage was hearing about how the Chinese waited in massive lines to get divorces. The second was being told that we would have a massive number of divorces to contend with. The third was waiting throughout the pandemic for these divorces to be filed and that never happened. And now, we’re in the fourth stage where the pandemic is supposedly waning, the courts are opened, and those who want to dissolve their marriages are moving forward with their process.

The pandemic appears to have acted as a catalyst for struggling marriages. All the problems that seemed manageable when the couple was not around each other 24/7 suddenly became unmanageable when there was no place to escape. Add financial concerns, issues with having to care for the children, homeschooling preparations, and general uncertainty about the future and you have a potential powderkeg that is about to blow at any moment.

Nonetheless, marriages that were on sure footing before the pandemic were not overly destabilized by added time together. In fact, working together to manage major struggles actually brought these couples closer together.

If your marriage did not survive the stress of the pandemic, it may be time to contact a Media divorce attorney today. Barbara Flum Stein & Associates can help you negotiate a fair settlement for yourself and your children, and give you a sure foundation on which to write the next chapter of your life.