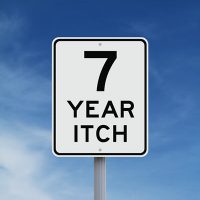 The fine people at Psychology Today recently asked experts about marriage as a lifestyle choice. Today, we consider the LGTBQ community a lifestyle choice, so why not married couples too? One of the tricky things when you ask this question, is that it then becomes one choice among many. If you asked most Americans, they would probably tell you that marriage is something that they would very much want in their future. In fact, 90% of Americans will be married at some point in their lives. Nonetheless, a growing number of Americans believe that marriage will not improve the quality of their lives.

For that reason, prominent family psychologists were asked to discuss widely held beliefs about marriage that were not necessarily true. They came up with three.

There is a widely-held belief that after seven years of marriage, you will be less satisfied in the marriage than you were for the last seven years. The term “seven-year itch” was drawn from a romantic comedy of the same name. However, recent studies have challenged the notion that couples automatically become less stimulated by each other after seven years. In fact, for some couples, this happens so severely, that it pulls the average down for everyone, and that, in fact, is what we’re seeing.

A more refined analysis begins from the starting point of couples who have a high degree of satisfaction in their marriage in the beginning. These marriages do not tend to show the same curve that other marriages have. In fact, the seven-year itch rule applies most notably to marriages that start off in a place of dissatisfaction. This happens when one spouse believes that marriage will significantly change the other spouse, or they will start behaving more responsibly once they say, “I do.” The study confirms that marriages that start off in the low-satisfaction range plummet rapidly, and that they break the curve for everyone.

White affluent couples as an exception

Studies indicate that poor families face different problems than rich ones. Of course, that’s true, but does it impact the quality of their marriage? We don’t know. Why not? Because we’ve been studying suburban, white, heterosexual couples for the past 50 years and cannot accurately draw conclusions about other populations from that data. Hence, data that makes assumptions about the general population is marred by the sample only containing one demographic. No conclusions about other populations can be drawn from that data.

Are you considering divorce? Even if you haven’t made a decision yet, talking to a Media divorce attorney can help you make the best decision you can. Call Barbara Flum Stein & Associates today to discuss your concerns in more detail.